In this mini-episode we look at a strange event in Microsoft's early history and their first case of piracy. Along the way you will learn about the best advetrizing campaign in history: the MITS MOBILE Computer Caravan! 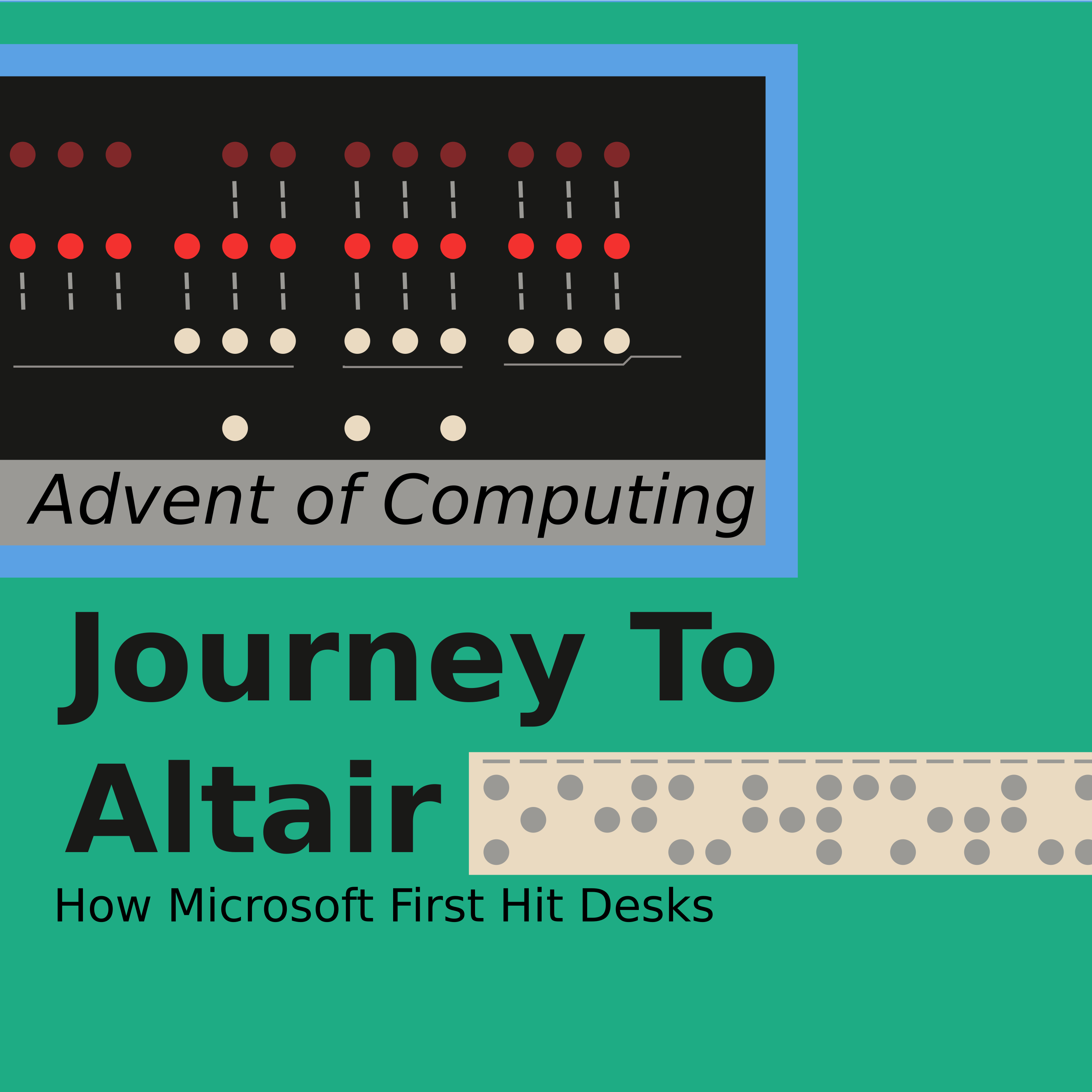 Today we are going to be traveling back to the late 1970s to take a look at the early days of the home computer. And specifically how Microsoft found a foothold at just the right time and place. And for Bill Gates and Paul Allen that would come in the form of BASIC.

Along the way we will cover the Altair 8800, vaporware, and how Bill Gates violated Harvard student conduct.

We’ve covered Xerox PARC a few times - and one aspect that’s come up has been the development of the Bravo word processor from Butler Lampson, Charles Simonyi, and team. Simonyi went on to work at Microsoft and spearheaded the development of Microsoft Word. But Bravo was the first WYSIWYG tool for creating documents, which we now refer to as a word processor. That was 1974.

Something else we’ve covered happened in 1974, the release of the Altair 8800. One aspect of the Altair we didn’t cover is that Michael Shrayer was a tinkerer who bought an Alatir and wrote a program that allowed him to write manuals. This became the Electric Pencil. It was text based though and not a WYSIWYG like Bravo was. It ran in 8k of memory and would be ported to Intel 8080, Zylog Z-80, and other processors over the years leading into the 80s. But let’s step back to the 70s for a bit. Because bell bottoms.

The Altair inspired a clone called the IMSAI 8080 in 1975. The direct of marketing, Seymour Rubenstein started tinkering with the idea of a word processor. He left IMSAI and by 1978, put together $8,500 and started a company called MicroPro International. He convinced Rob Barnaby, the head programmer at IMSAI, to join him.

They did market research into the tools being used by IBM and Xerox. They made a list of what was needed and got to work. The word processor grew. They released their word processor, which they called WordStar, for CP/M running on the Intel 8080. By then it was 1979 and CP/M was a couple years old but already a pretty dominant operating system for microcomputers. Software was a bit more expensive at the time and WordStar sold for $495.

At the time, you had to port your software to each OS running on each hardware build. And the code was in assembly so not the easiest thing in the world. This meant they wanted to keep the feature set slim so WordStar could run on as many platforms as possible. They ran on the Osborne 1 portable and with CP/M support they became the standard. They could wrap words automatically to the next line.  Imagine that.

They ported the software to other platforms. It was clear there was a new OS that they needed to run on. So they brought in Jim Fox, who ported WordStar to run on DOS in 1981. They were on top of the world. Sure, there was Apple Write, Word, WordPerfect, and Samna, but WordStar was it.

Arthur C Clarke met Rubenstein and Barnaby and said they "made me a born-again writer, having announced my retirement in 1978, I now have six books in the works, all through WordStar." He would actually write dozens more works.

They released the third version in 1982 and quickly grew into the most popular, dominant word processor on the market. The code base was getting a little stale and so they brought in Peter Mierau to overhaul it for WordStar 4. The refactor didn’t come at the best of times. In software, you’re the market leader until… You thought I was going to say Microsoft moved into town? Nope, although Word would eventually dominate word processing. But there was one more step before computing got there.

Next, along with the release of the IBM PC, WordPerfect took the market by storm. They had more features and while WordStar was popular, it was the most pirated piece of software at the time. This meant less money to build features. Like using the MS-DOS keyboard to provide more productivity tools. This isn’t to say they weren’t making money. They’d grown to $72M in revenue by 1984. When they filed for their initial public offering, or IPO, they had a huge share of the word processing market and accounted for one out of every ten dollars spent on software.

WordStar 5 came in 1989 and as we moved into the 90s, it was clear that WordStar 2000 had gone nowhere so WordStar 6 shipped in 1990 and 7 in 1991. The buying tornado had slowed and while revenues were great, copy-protecting disks were slowing the spread of the software.

Rubinstein is commonly credited with creating the first end-user software licensing agreement, common with nearly every piece of proprietary software today. Everyone was pirating back then so if you couldn’t use WordStar, move on to something you could steal. You know, like WordPerfect. MultiMate, AmiPro, Word, and so many other tools. Sales were falling. New features weren’t shipping.

One pretty big one was support for Windows. By the time Windows support shipped, Microsoft had released Word, which had a solid two years to become the new de facto standard. SoftKey would acquire the company in 1994, and go on to acquire a number of other companies until 2002 when they were acquired. But by then WordStar was so far forgotten that no one was sure who actually owned the WordStar brand.

I can still remember using WordStar. And I remember doing work when I was a consultant for a couple of authors to help them recover documents, which were pure ASCII files or computers that had files in WordStar originally but moved to the WSD extension later. And I can remember actually restoring a BAK file while working at the computer labs at the University of Georgia, common in the DOS days. It was a joy to use until I realized there was something better.

Rubinstein went on to buy another piece of software, a spreadsheet. He worked with another team, got a little help from Barnaby and and Fox and eventually called it Surpass, which was acquired by Borland, who would rename it to Quattro Pro. That spreadsheet borrowed the concept of multiple sheets in tabs from Boeing Calc, now a standard metaphor. Amidst lawsuits with Lotus on whether you could patent how software functions, or the UX of software, Borland sold Lotus to Novell during a time when Novell was building a suite of products to compete with Microsoft.

We can thank WordStar for so much. Inspiring content creators and creative new features for word processing. But we also have to remember that early successes are always going to inspire additional competition. Any company that grows large enough to file an initial public offering is going to face barbarian software vendors at their gates. When those vendors have no technical debt, they can out-deliver features. But as many a software company has learned, expanding to additional products by becoming a portfolio company is one buffer for this. As is excellent execution.

The market was WordStar’s to lose. And there’s a chance that it was lost the second Microsoft pulled in Charles Simonyi, one of the original visionaries behind Bravo from Xerox PARC. But when you have 10% of all PC software sales it seems like maybe you got outmaneuvered in the market. But ultimately the industry was so small and so rapidly changing in the early 1980s that it was ripe for disruption on an almost annual basis. That is, until Microsoft slowly took the operating system and productivity suite markets and .doc, .xls, and .ppt files became the format all other programs needed to support.

And we can thank Rubinstein and team for pioneering what we now call the software industry. He started on an IBM 1620 and ended his career with WebSleuth, helping to usher in the search engine era. Many of the practices he put in place to promote WordStar are now common in the industry. These days I talk to a dozen serial entrepreneurs a week. They could all wish to some day be as influential as he.

The Prehistory of the Computer