Today we’re going to review the innovations in electricity that led to the modern era of computing.

As is often the case, things we knew as humans, once backed up with science, became much, much more. Electricity is a concept that has taken hundreds of years to really take shape and be harnessed. And whether having done so is a good thing for humanity, we can only hope.

We’ll take this story back to 1600. Early scientists were studying positive and negative elements and forming an understanding that electricity flowed between them. Like the English natural scientist, William Gilbert  - who first established some of the basics of electricity and magnetism in his seminal work De Magnete, published in 1600, when he coined the term electricity. There were others but the next jump in understanding didn’t come until the time of Sir Thomas Browne, who along with other scientists of the day continued to refine theories. He was important because he documented where the scientific revolution was in his 1646 Pseudodoxia Epidemica. He codified that word electricity. And computer by the way.

And electricity would be debated for a hundred years and tinkered with in scientific societies, before the next major innovations would come. Then another British scientist, Peter Collinson, sent Benjamin Franklin an electricity tube, which these previous experiments had begun to produce.

Benjamin Franklin spent some time writing back and forth with Collinson and flew a kite and proved that electrical currents flowed through a kite string and that a metal key was used to conduct that electricity. This proved that electricity was fluid. Linked capacitors came along in 1749. That was 1752 and Thomas-Francois Dalibard also proved the hypothesis using a large metal pole struck by lightning.

James Watt was another inventor and scientist who was studying steam engines from the 1760s to the late 1790s. Watt used to quantify the rate of energy transfer, a unit to measure power. Today we often measure those watts in terms of megawatts. His work in engines would prove important for converting thermal into mechanical energy and producing electricity later. But not yet.

1799, Alessandro Volta built a battery, the Volta Pile. We still refer to the resistance of an ohm when the current of an amp flows through it as a volt. Suddenly we were creating electricity from an electrochemical reaction.

Humphry Davy took a battery and invented the “arc lamp.” By attaching a piece of carbon that glowed to it with wires.

Budding scientists continued to study electricity and refine the theories. And by the 1820s, Hans Christian Orsted proved that an electrical current creates a circular magnetic field when flowing through a wire. Humans were able to create electrical current and harness it from nature. Inspired by Orsted’s discoveries, André-Marie Ampère began to put math on what Orsted had observed. Ampére observed two parallel wires carrying electric currents attract and that they repeled each other, depending on the direction of the currents, the foundational principal of electrodynamics. He took electricity to an empirical place. He figured out how to measure electricity, and for that, the ampere is now the unit of measurement we use to track electric current.

In 1826 Georg Ohm defined the relationship between current, power, resistance, and voltage. This is now called “Ohms Law” and we still measure electrical resistance in ohms.

Michael Faraday was working in electricity as well, starting with replicating a voltaic pile and he kinda’ got hooked. He got wind of Orsted’s discovery as well and he ended up building an electric motor. He studied electromagnetic rotation, and by. 1831 was able to generate electricity using what we now call the Faraday disk. He was the one that realized the link between the various forms of electricity and experimented with various currents and voltages to change outcomes. He also gave us the Faraday cage, Faraday constant, Faraday cup, Faraday's law of induction, Faraday's laws of electrolysis, the Faraday effect, Faraday paradox, Faraday rotator, Faraday wave, and the Faraday wheel. It’s no surprise that Einstein kept a picture of Faraday in his study.

By 1835, Joseph Henry developed the electrical relay and we could send current over long distances.

Then, in the 1840s, a brewer named James Joule had been fascinated by electricity since he was a kid. And he discovered the relationship between mechanical work and heat. And so the law of conservation of energy was born. Today, we still call a joule a unit of energy. He would also study the relationship between currents that flowed through resistors and how they let off heat, which we now call Joules first law. By the way, he also worked with Lord Kelvin to develop the Kelvin scale.

1844, Samuel Morse gave us the electrical telegraph and Morse code. After a few years coming to terms with all of this innovation, JC Maxwell unified magnetism and electricity and gave us Maxwell’s Equations, which gave way to electric power, radios, television, and much, much more.

By 1878 we knew more and more about electricity. The boom of telegraphs had sparked many a young inventor into action and by 1878 we saw the lightbulb and a lamp that could run off a generator. This led Thomas Edison to found Edison Light and Electric and continue to refine electric lighting. By 1882, Edison fired up the Pearl Street Power station and could light up 5,000 lights using direct current power. A hydroelectric station opened in Wisconsin the same year. The next year, Edison gave us the vacuum tube.

Tesla gave us the Tesla coil and therefore alternating current in 1883, making it more efficient to send electrical current to far away places. Tesla would go on to develop polyphase ac power and patent the generator to transformer to motor and light system we use today, which was bought by George Westinghouse. By 1893, Westinghouse would use aC power to light up the World’s Fair in Chicago, a turning point in the history of electricity.

And from there, electricity spread fast. Humanity discovered all kinds of uses for it. 1908 gave us the vacuum and the washing machine. The air conditioner came in 1911 and 1913 brought the refrigerator. And it continued to spread.

By 1920, electricity was so important that it needed to be regulated in the US and the Federal Power Commission was created. By 1933, the Tennessee Valley Authority established a plan to built damns across the US to light cities. And by 1935 The Federal Power Act was enacted to regulate the impact of damns on waterways.

And in the history of computing, the story of electricity kinda’ ends with the advent of the transistor, in 1947. Which gave us modern computing. The transmission lines for the telegraph put people all over the world in touch with one another. The time saved with all these innovations gave us even more time to think about the next wave of innovation. And the US and other countries began to ramp up defense spending, which led to the rise of the computer. But none of it would have been possible without all of the contributions of all these people over the years. So thank you to them.

And thank you, listeners, for tuning in. We are so lucky to have you. Have a great day!

Magnetic: The History of Computing ep 4 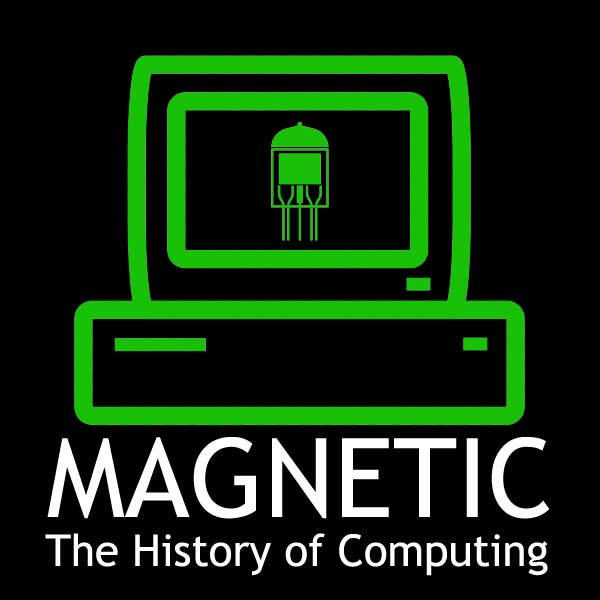 This episode looks at some really interesting inventions with the Bulb and Electricity that played a major role in the development of the electronic computer.  This includes vacuum tubes and Cathode Ray Tubes (CRT's).